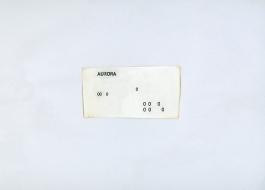 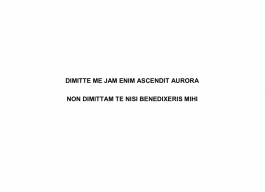 For me this work is the most central piece in my thesis project. It is also the conclusive part of the project. However, I recognize the fact that to the viewer the work does not communicate much of its content, unless the word Aurora is recognized in connection with the Aurora hospital in Helsinki. This photograph is a modified reproduction of a small piece of paper, scanned and blown up in size. Unlike the rest of the works in my thesis project, all of which are self portraits, this one is rather a portrait of an event. The work depicts a document, an image of a conserved piece that carries with it some of the history of the events that my thesis project is a reflection of.

This photograph also has a textual component connected to it. The text is from the Latin Bible: The Vulgate, from the book of Genesis and it translates as: and then he said: “Let me go, for the day has broken.” But Jacob said: “I will not let you go unless you bless me.” The text is taken from the story of Jacob, where he wrestles with a stranger. Eventually the man reveals that Jacob has indeed wrestled with God. In the end Jacob says: “I saw God face-to-face, and yet my life was spared.” (Genesis 32:24-30)

The photograph is made by scanning an old piece of paper roughly 10x5cm in size. The piece contained the contact information of the acute psychiatric ward of the Aurora hospital in Helsinki. I escorted someone close to me there when they suffered a psychotic breakdown that involved many religious hallucinations and strong fear of an imminent apocalypse. As I was exiting the hospital, I received the piece of paper with the contact information. I held onto the paper for about three years. I held onto it as a kind of testimony, or a remnant of the events. I edited the reproduction, so that only the word Aurora and all of the zeroes in the information were left. The zeroes indicate the total ruin and the need for reconstruction, all other information disappears, but the zeroes and the word together symbolise a desperate catharsis. Aurora is a Latin word and it means daybreak.

Christ is not found in clinging to scraps of evidence. The theme in many of my works is idolatry and the ‘depraved soul that lives but in sin, in a world depraved by sin’… The constructed self in my practice looks for Christ in the wrong places, because she is desperate to find him. She sees Christ in her lover. When the lover is gone, she sees Christ in the remnants of her. Like Jacob, I refused to let go, unless she blesses me.

If a relic may be evidence of a false martyr, the resulting work is as sorrowful, as devoted and as yearning as the practice of keeping relics. The evidence, the debris of death becomes precious because it is the only sign left of the beloved presence of the sacred. 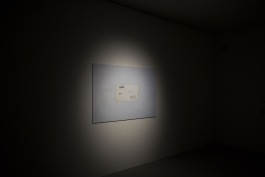